, /PRNewswire/ -- Carnival Cruise Line today announced that it has partnered with world-renowned chef and restaurateur Emeril Lagasse on his first-ever seagoing restaurant aboard Carnival's newest and most innovative ship, , setting sail in summer 2020. 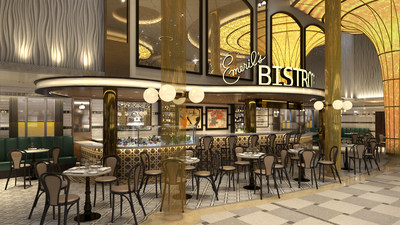 Located in the heart of French Quarter zone, Emeril's Bistro 1396 will showcase the chef's signature dishes that earned him the reputation as one of most acclaimed and respected chefs.

" is designed as the ultimate vacation experience, and that extends to the food and beverage offerings," said , president of . "Emeril Lagasse has brought the uniqueness and fun of dining to foodies all over the world, and we're thrilled that he'll now bring that same experience to Carnival. There is no one better suited than Emeril to add a level of authenticity to the experience that will give our guests another way to Choose Fun."

"I've developed restaurants all over the country, but to create my first restaurant at sea – on a ship named with its own French Quarter, no less – was an opportunity I simply could not pass up," said Lagasse. "I'm excited to be a part of this brand new ship and bring a taste of the flavors of cuisine to the guests sailing on ."

Named after hull number at the Meyer Turku shipyard in , the bistro will celebrate rich culture with favorites and daily specials.

Emeril's Bistro 1396 will take center stage in French Quarter, one of the ship's six themed zones where guests will find fun, memorable ways to create their own personalized vacations. The French Quarter will capture the festive spirit of with food, cocktails and, of course, live jazz.

Currently under construction at the Meyer Turku shipyard in , is slated to enter service in , before repositioning to for a series of voyages then shift to Port Canaveral for year-round seven-day cruises beginning in .

As a national TV personality, he has hosted more than 2,000 shows on the , and is the food correspondent for "Good Morning America." Most recently, launched an original series featuring Lagasse called Eat the World with Emeril Lagasse. The series received five daytime Emmy nominations and won Outstanding Culinary Program.  The series was also a semifinalist in the category Outstanding Personality of Host. Lagasse has appeared as a guest judge in five seasons of Bravo's hit food series, "Top Chef," and two seasons of "Top Chef Jr".  He was named a co-host on the last three season of the "Rachael Ray Show," and has appeared on the Cooking Channel with five seasons of "Emeril's ." Lagasse is the bestselling author of 19 cookbooks, the latest titled Essential Emeril: Favorite Recipes and Hard-Won Wisdom from in the Kitchen.

In 2002, Lagasse established the to support children's educational programs that inspire and mentor young people through the culinary arts, nutrition, healthy eating, and important life skills. To date, the Foundation has distributed in grants benefitting children's charities in , and on the . In 2013, Lagasse was named the Humanitarian of the Year by the for his dedicated efforts to further the culinary arts in America, as well as his philanthropic work supporting children's educational programs through his Foundation.